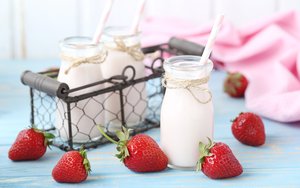 Yogurt drinks are helping to keep the overall yogurt category growing at a healthy pace, even as the explosive growth spurred by the advent of Greek has been slowing.

Between 2011 and 2016, sales of yogurt drinks (including fruit varieties, smoothies, kefir, lassi et al.) grew by 62%, to $893 million, according to Mintel — pretty impressive, even for a relatively new subcategory with lots of room for growth.

The researcher projects that sales of drinkable yogurt will jump 11% this year -- the second year of double-digit growth.

That said, the liquid format still represents a small share in comparison with spoonable yogurt, which will reach an estimated $8.2 billion this year and represents about 90% of total yogurt sales. Spoonable yogurt is projected to reach $10 billion by 2021.

“As the boom times ushered in by the novelty of Greek offerings fade, category players are stepping up flavor and format innovation” in the category, sums up Beth Bloom, senior food and drink analyst at the firm. Particularly promoted for breakfast and snacking, the still-small yogurt drinks segment represents an opportunity to further leverage yogurt’s “convenient health” positioning, she notes.

Furthermore, “as adoption of the yogurt drinks segment grows, so does innovation,” Bloom says, pointing out that it’s one of the few food and drink categories brand-new product launches are outpacing “simple variations on form.”

Snacking is a “huge” opportunity for the category, which is introducing new formats that include “savory and satiating” varieties, according to Bloom.

Well-being and nutritional reasons continue to drive yogurt consumption, with 43% saying they buy it for digestive health, and 37% for its calcium content (47% among female yogurt consumers).

However, three-month data ending in May 2016 shows that about 22% of Millennials are buying whole-fat varieties. Those are seeing strong growth in natural channels, whereas sales of non-fat options are struggling, “pointing to a growing acceptance of fat in food,” says Bloom.

Appealing to consumers’ ever-increasing interest in functional foods and beverages is one way that yogurt marketers can differentiate their products, she adds.