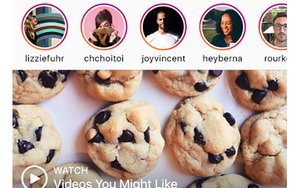 “With Stories on Explore, it’s easier than ever to discover new stories you’ll want to watch,” a company spokesperson said on Tuesday.

The social network launched Stories in August as a feature for sharing everyday moments. Since then, adoption has been strong. Already, more than 100 million people use stories on a daily basis, according to internal figures.

Now, at the top of the Explore page, users can expect to find a new suggested stories section, which highlights interesting stories from across Instagram’s community.

Like the rest of Explore, the stories that users encounter will be personalized to their interests.

Despite the rise of Snapchat, Instagram continues to post impressive usership figures. The network’s monthly user base more than doubled over the past two years, and it added its last 100 million active users faster than the previous 100 million.

On average, Instagram now sees about 95 million photos and videos shared per day, and about 4.2 billion "likes” per day. More broadly, the continued success of Instagram is contributing to Facebook’s bright prospects.

Just this week, Pivotal Research Group released updated expectations for Facebook, which equate to a share of global digital advertising (minus China) that rises from 18% to 29% between 2016 and 2021.

As such, Pivotal decided to raise its price target on Facebook to $175.