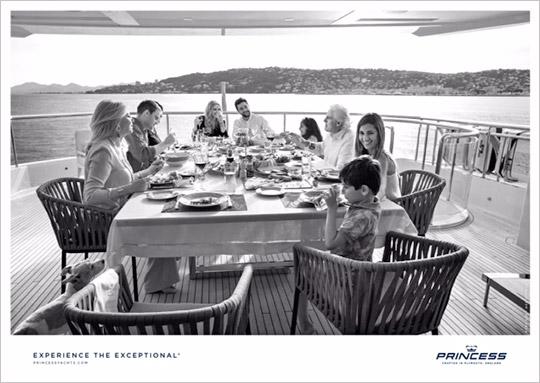 Developed with agency BSUR Amsterdam, the campaign differs from traditional messaging where products mainly are displayed to instead focus on lifestyle.

Images portray real people in normal situations heightened by the fact that they happen to be on a yacht. The scenes, photographed by Roger Neve in black and white are understated and were shot in an intimate way to make the viewer feel part of the moment.

The media buy is targeting the U.S., North & South America, China, Russia  Europe.  Other targeted regions include Nord Africa, particularly Lebanon and Egypt and the Middle East with Qatar and Dubai. Asia countries include Singapore, Philippines and Taiwan.

This is the first project between the two companies since BSUR was named global lead creative brand and communications agency in 2015. Since 2008 the Louis Vuitton Moët Hennessy (LVMH) group has owned the yacht company.