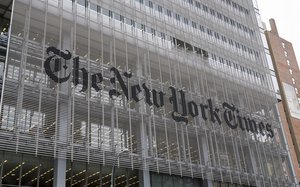 The New York Times Company has appointed Arthur Gregg Sulzberger, the 36-year-old son of the newspaper’s chairman and publisher, as its deputy publisher.

The appointment, which takes into effect Nov. 1, sets Sulzberger up to succeed his father, Arthur Ochs Sulzberger Jr., the newspaper said on Wednesday.

A New York Times spokeswoman told The Wall Street Journal that no timeline has been put in place for when the elder Sulzberger might retire. However, his father, Arthur "Punch" Ochs Sulzberger, stepped down when he was 65, the same age Sulzberger Jr. is now.

If he succeeds his father, Sulzberger will become the fifth generation in his family to serve as publisher since Adolph S. Ochs purchased the paper in 1896, The New York Times said.

The decision was approved by a selection committee that included representatives of The Times Company’s senior management, its board and the Ochs-Sulzberger family trust. Interestingly, the elder Sulzberger was not on the selection committee, likely a deliberate attempt to remove himself from the process to ensure it appears impartial.

Sulzberger joined The New York Times in 2009 and was most recently an associate editor for strategy, responsible for leading a team that focused on the newspaper's  digital transformation. He is also the author of the Times' pivotal 2014 innovation report, which helped map out its push for digital innovation.

Sulzberger’s promotion comes as a precursor to the release of the 2020 Report, a document that is expected to lead the paper’s path into the next phase of digital and mobile development.

The younger Sulzberger was one of three family members who had been considered for the role. His cousins, Sam Dolnick and David Perpich, had also been in the running.

The announcement of the new deputy publisher had been highly anticipated in the newsroom, but few expected the decision to be made this early. The company previously said it would happen by next May. The early decision likely means the Times is eager to enter into a new era.

The company said that in order to avoid confusion between the elder Sulzberger and his son, who will be working closely together and are both named Arthur, the new deputy publisher will be referred to as A.G.
management, newspapers
Next story loading