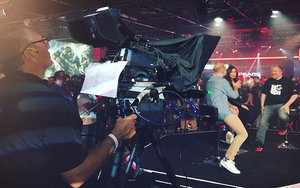 Some 1.8 million people tuned-in to the October 5 broadcast via real-time streaming on Xbox Live, Facebook Live, Twitch, YouTube and Beam that promoted Microsoft's "Gears of War 4," according to ad agency Midnight Oil that developed the promotional campaign.

The YouTube replay of the full-length 90-minute event, for example, received over 125,000 views, while the YouTube 90-second “Live Highlight” video notched 1.5 million views. In total, the show generated 18.2 million social media mentions, and in the week following the live stream, the full show and 10 key segments have been viewed 3.9 million times.

In their efforts leading up to the event, Midnight Oil first produced an announcement video for Xbox’s YouTube channel. ThenMidnight Oil introduced content starring players from the LA Galaxy and Seattle Sounders soccer teams. In addition to being featured in tweets from the Galaxy and Sounders accounts, this video was played on the LED scoreboard at StubHub Center in Los Angeles during the Sep. 25th game.

Seattle's Sounders were selected to participate in this promotion due to their connection to Microsoft. The Galaxy's involvement was more happenstance. "The Sounders and Galaxy have a friendly rivalry that is the ultimate showcase of teamwork - a core pillar of the Gears of War franchise - and they had a match schedule during an ideal promotional window for the show.  So, it made sense for us to push content into that space," says Blair Herter, executive director, business development, Midnight Oil.

The campaign was designed as a show of appreciation to fans of the franchise. "Every element of the production—from the 'you're all invited to the world’s largest Gears party' vibe + set design to fan-specific moments to curated 'Gears influencer' pieces—was meant to reflect our key message of thanks," says Herter. "We’re very happy about the results as measured against those expectations."

The videogame launched on October 11. Microsoft acquired the rights to the military science fiction third-person shooter video game in 2014.