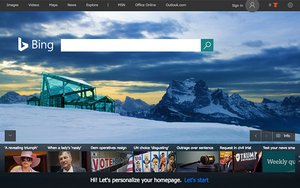 Despite a slow and difficult climb for Microsoft, its search engine Bing grew advertising revenue -- excluding traffic acquisition costs -- by 9% during the third quarter of 2016, driven by increased revenue per search and search volume.

In fact, search and sales of Surface, which increased about 38% in revenue during the quarter, partially offset declining sales of mobile phones, Xbox consoles, and other hardware.

On Friday shares of Microsoft stock hit an all-time high based on positive earnings. While search and Cortana gave Microsoft a list, the cloud business buoyed the results, according to The Wall Street Journal. Amazon still dominates the market, but Microsoft, as the WSJ reports, "has emerged as the online retailer’s stiffest competition."

Driven by growth in software and IT services revenue, worldwide IT spending is forecast to reach $3.5 trillion in 2017, up 2.9% from the 2016 estimated spending of $3.4 trillion, according to the latest forecast by Gartner.

As part of Gartner's top 10 strategies technology trends for 2017, artificial intelligence, advanced machine learning, intelligent apps and devices, along with mesh apps and service architectures will all require cloud computing and many will require sophisticated search platforms.