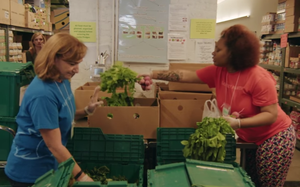 Subway is using a Mic-based content series to drive awareness of a one-day offer that will benefit Feeding America.

On Nov. 3, National Sandwich Day, customers who buy any sub plus any drink will qualify for a free sub of equal or less value, and Subway will donate one meal to Feeding America – with no limit on the meals donated.

Subway’s declared goal for the promotion, dubbed “The Good Deed Feed,” is to donate more than 11 million meals during the day, thereby breaking Feeding America’s one-day donation record. Subway says it will publicly announce the actual number of meals donated.

In addition, each time someone shares content from the series on Mic (and also on YouTube, see one video below), which features stories from Subway franchisees and families served by Feeding America’s food banks, Mic will donate a meal.

Subway will also look to drive traffic and sales by offering a National Sandwich Day Snapchat filter that can be unlocked at most of its 27,000-plus U.S stores during Nov. 3.

Subway stores are working with Food Banks Canada on a similar donation of meals as part of the National Sandwich Day offer and promotion.