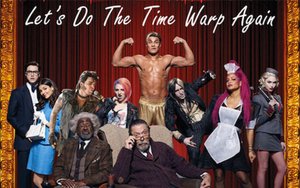 Fox's "Rocky Horror Picture Show" did not catch fire among viewers or advertisers.

The musical's early ratings were down 54% from the similarly themed "Grease Live!" that aired on Fox earlier in the year.

Viewers largely avoided social media during the broadcast, according to Amobee. There were 92.2K Tweets around the hashtag #RockyHorror during the show's Eastern broadcast. By comparison, "The Wiz Live!" received 1.37 million Tweets and "Grease Live!" attracted 1.4 million Tweets during the same time frame.

"Rocky Horror" did top the religious musical event "The Passion," which tracked 91.2K Tweets during its March 20th broadcast.

Advertisers found themselves ignored despite their best attempts at igniting conversation around the show. AT&T U-verse hosted a live Tweet that resulted in a mere 50 Tweets mentioning both Rocky Horror and their @Uverse handle.
Fox did a promotion with Snapchat where there were Snapcodes that aired during bumpers throughout the show that unlocked exclusive filters. However, only 2% of all Rocky Horror digital content engagement mentioned Snapchat.

The big winner among these diminished expectations was Playbill, which hosted a live Tweeting with Rocky Horror Tweets coming from the @playbill handle. The brand saw that these comments were Retweeted 1.97K times.

It appears that not airing the musical live took away from it being viewed as a real-time event.

Many Tweets incorrectly referred to it as a live event or complained that it wasn’t a live event. They also complained about the theater audience reaction shots during the TV film, intended to simulate the experience of seeing the original film with a participatory crowd at a midnight showing.