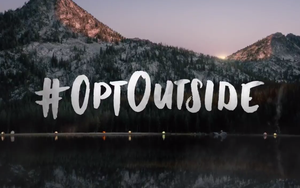 Outdoor retailer REI, which won a pup tent full of awards for its anti-Black Friday campaign last year, is at it again. This year, it’s new #OptOutside campaign, which cheerfully asks “Will you go out with me?,” has enlisted some 275 organizations to encourage people to spend the day after Thanksgiving frolicking outside instead of bulldozing their way through a shopping mall.

Even given last year’s success, it’s a gutsy move. ShopperTrak predicts Black Friday will be the biggest shopping day this year. (Dec. 26th and Dec. 23rd are predicted to be the next busiest.) And it comes at a time when many retailers are rethinking their store opening policies throughout the Thanksgiving Day weekend, in complicated forecasts that weigh the risk of some consumers’ scorn, the impact of continued gains in e-commerce, and the predictable rewards of mobs who love door-busters.

REI, an outdoor co-op retailer with 6 million members, says the #OptOutside campaign is an attempt to create “a cultural counterweight” to Black Friday. Because last year’s effort struck such a chord in many people, it’s expanded the effort “to lift up and celebrate the people who dedicate their lives to the outdoors.” An REI spokesperson says it partnered with production company Juliet Zulu for upbeat videos, using music from a local Portland artist.

Besides shutting all of its 149 stores and giving its 12,000-plus employees Thanksgiving and Black Friday off, it expects to continue adding partner organizations in the weeks ahead, which will steer those in need of a destination to thousands of trails and parks. Participants can also upload photos of their day outdoors through social media channels.
Partner organizations include those promoting diversity (like Black Girls Run, Girl Trek and Outdoor Afro), The National Parks Service, the Trust for Public Land, and the Sierra Club.

Other companies are hooking up with REI this year, too, including Subaru of America: The dog-friendly car brand is providing a fleet of vehicles and drivers who will liberate shelter dogs in New York City for the day, taking them into nature. And with Google, REI is introducing a pilot program in Austin and Seattle, near REI headquarters, which includes helping local trail systems tackle organizational issues. There are also tie-ins with Meetup and Upworthy.

It’s no surprise that the REI effort is gaining more momentum, with more stores rethinking the decision to open their doors on Thanksgiving Day. Earlier this month, Mall of America announced it would be closed all of turkey day, as did CBL & Associates, which manages dozens of shopping malls.

And retailers are picking sides, with stores like Costco and the Home Depot opting to close on Thanksgiving Day, while Macy’s will open.

In part, the shift is due to consumer pushback against “Christmas creep,” with stores’ promotional hype starting earlier and earlier. But it’s also due to the perception among some stores that the sales they gain on Thanksgiving Day don’t represent incremental gains, but rather just draw money that would have been spent later in the weekend.

Walmart, which historically stayed open for part of the day to sell last-minute groceries, started the trend, writes Charles O’Shea, an analyst who covers retail for Moody’s, in a recent note, with many stores following. “While some have benefitted, most have not,” he writes. “We believe most retailers would be best served shifting dollars spent on Thanksgiving openings by pulling their web specials forward and picking off some additional sales earlier in the week, and offering heavier in-store promotions over the weekend. We have seen too many instances of apparel retailers having to promote heavily the week after Thanksgiving, which is an indication that sales were slow over the weekend.”