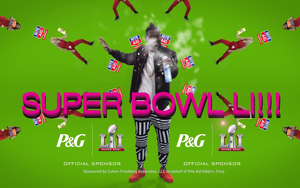 Not since Robin Williams danced across the screen while vacuuming in Mrs. Doubtfire garb has a celebrity tried to mix housework with a two-step to the amusement of a country.

Procter & Gamble, Rite-Aid and Pittsburgh Steelers wide receiver Antonio Brown are teaming up this season to promote cleaning while grooving, and a chance to go to Super Bowl LI (that’s 51 for those not up on the higher Roman numerals). Brown, who has appeared on ABC’s Dancing with the Stars, is known for his end zone dances after touchdowns.

The parties have just released a video challenging fans to a cleaning dance off. The video features Brown showing off his cleaning-oriented dance moves, using items such as a Swiffer and other P&G cleaning products.

The psychedelia-infused video, which is housed on Brown’s Facebook Page and on Rite-Aid’s YouTube channel, ends with the wide-receiver challenging America to show off their best cleaning-dance moves on social media using the hashtag #antoniodancecontest for a chance to head to the Super Bowl.

Said Eric Rose, P&G brand manager, in a statement, “Dancing while cleaning has long been a universal consumer behavior so we thought it would be fun to reward our most creative shoppers that tackle cleaning in style.”