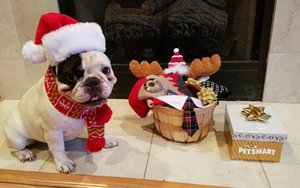 Manny the Frenchie is a social media sensation with discerning tastes.

The French Bulldog has 1.7 million Facebook fans, 1 million Instagram followers and 21,000 Twitter followers. He also stumps for Southwest Airlines and has his own line of products.

So it only makes sense that Pet Smart would let the French Bulldog have first crack at trying out its holiday collection, which includes toys, treats and apparel. The collection hits store aisles next month.

According to Harris Poll, 64% of pet owners buy them gifts on holidays. And Manny’s pet parent, Amber Chavez, takes the giving to a new height.

Chavez says Manny’s shopping list this year covers a range of gifts from holiday bed gift sets to human-food-inspired treats. He’s narrowed his list down to his top 10 favorites including a Hanukkah Memorial Toy for his friends celebrating Hanukkah, a PetHoliday Pie Slice toy, an ironic Hipster Reindeer dog sweater and even something for his fish friends: a Holiday Gingerbread House to deck out their aquariums.

Also for the holidays, PetSmart will offer Chance and Lucky Plus toys. Through Dec. 25, 10% of the proceeds from these toys benefit PetSmart Charities to help save homeless pets.

For the third year in a row, PetSmart stores are collecting Chance and Lucky items that are purchased and donated by PetSmart shoppers to be given to children’s hospitals as well as fire and police departments in their communities for distribution to children in need. Last year, PetSmart stores donated more than 840,000 toys to kids across the U.S. and hope to surpass that goal this year.