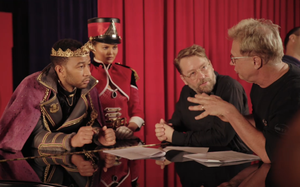 Target is the first major retailer out of the gate with its holiday marketing plans, and they’re splashy: The retailer cast singer John Legend and model Chrissy Teigen in an eight-minute version of The Nutcracker. The ads are scheduled to run in two four-minute segments, breaking during the broadcast premiere of Disney’s Frozen, scheduled to air Dec. 11.

The Minneapolis-based chain has given the classic story a modern twist, with Legend as the Rat King and Teigen as the Nutcracker. It's the first time Legend and Teigen, married in real life, have collaborated on a project.

Other TV spots, from 72 and Sunny, focus on the backstage efforts to bring The Toycracker to life, complete with Barbie as troll hairdresser and an orchestra pit full of Minions. Characters like Elmo, Iron Man and the Hulk make appearances via computer generation. And, as was true in the store’s back-to-school campaign this year, kids are running the show, not grown-ups.

The chain’s Ginger Breadington returns, calling attention to deals as Black Friday gets closer. And it says it plans to incorporate the “spectacular” theme throughout stores, digital elements and on its Web site.

The company is also putting more muscle behind its sales strategy, announcing free shipping, starting now and running through January, as well as an extended price matching policy and special merchandise. That includes Wondershop, new this year, offering tree-trimming products. And Wonderlist, also new, is a digital gift-giving guide, based on personality traits of the recipient, which steers users to a selection of 400 gifts.

But what seems most clear is that Target -- which has stumbled as it orchestrates its comeback, with a decline in sales in its more recent quarterly results -- is bearing down on the categories it believes are its future, including style and kids. For the holiday, it says it intends to introduce 1,000 new items in the Cat & Jack children’s clothing line, the ambitious private-label brand launched this fall. It also says shoppers will find over 1,800 toys that are new or exclusive, a 15% jump from last year.

To get consumers shopping across categories, it is also stressing the “pay less” half of its motto with a new $10 off a $50 purchase offer, set to begin in November. The deal will run in different product categories each week. And in December, it plans to offer shoppers the option to save $25 on purchases of $100 or more.