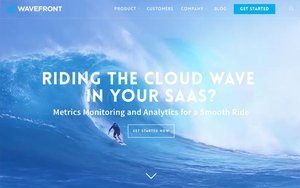 Wavefront has closed on a $52 million Series B funding round, the cloud-based analytics platform announced on Tuesday.

The Palo Alto-based company plans to utilize the new capital to expand the company’s global footprint, further product development and research, and invest in marketing and customer support. Wavefront also plans to nearly double its employee size from 40 to 70 by the end of 2017.

The funding round was led by Tenaya Capital, with participation from previous investors Sequoia Capital and Sutter Hill Ventures.

Founded in 2013, Wavefront powers a cloud-based application that monitors and manages metrics in real-time for Software-as-a-Service (SaaS) companies. It ingests data from host servers, devices and applications to illustrate cloud computing loads and business performance data in a single window, instead of keeping data siloed like some legacy systems.

Wavefront’s substantial Series B round is not without cause, as the company has experienced a tremendous amount of growth in the past two years. Wavefront has launched more than 30 data plugins and picked up a host of new clients, including Box, Lyft, Groupon, and British Gas.

In addition, Wavefront says it has also increased the data ingestion rate of its service by more than 10 times.

Wavefront most recently gobbled an $11.5 million Series A funding round in February 2016, putting the company’s funding-to-date at a cool $65.5 million.