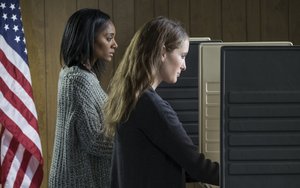 Started Christmas shopping yet? Probably not: With vitriolic political ads clogging the airwaves, new data from both the National Retail Federation and IRI Worldwide indicate consumers are laying low until the seemingly endless election uproar subsides.

The National Retail Federation says that as a result of that cautiousness, per-person holiday spending is likely to shrink to $935.58 this year, compared to the record $952.58 last year.

“Everywhere you turn—whether you’re picking up a newspaper or watching television—political advertisements are taking up ad space that retailers typically use to get holiday shopping on the minds of consumers,” says Matthew Shay, the group’s president and CEO, in its report. “Once the election has passed, we anticipate consumers will pull themselves out of the election doldrums and into the holiday spirit.”

The Washington D.C.-based trade organization’s figures reflect total spending, including food, flowers, and decorations, as well as presents for friends and families. And it even includes self-gifting, with 58% of the survey saying they’ll buy themselves something, laying out an average of$139.61 to do so.

But the looming election is casting some dark shadows on shopping: About 43% of people say they are spending more cautiously because of election uncertainty, according to its flash poll of some 1,000 consumers last week. (The NRF’s spending figures come from a larger data set, based on some 7,700 adults.)

And IRI Worldwide says the looming elections are dampening consumers' economic hopes, with almost two-thirds saying they think their financial health will deteriorate next year, no matter who wins the election. And 55% say they intend to keep this year’s spending level with last holiday season, as a result.

The IRI research also finds that 47% of the 2,200 people it surveyed feel that their current finances are strained, with two-thirds of those consumers predicting their situation will get worse before it gets better. And among those who describe their finances as strained, 54% say they plan to spend less.