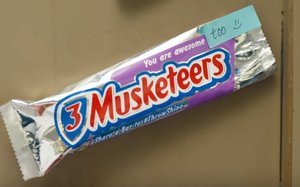 3 Musketeers is hoping to inspire teens and young adults to buy and physically share candy bars, while fostering positive vibes and brand associations, with upbeat wrapper messages and videos created for its #ThrowShine campaign.

In the latest effort clearly inspired in part by the phenomenal success of “Share a Coke,” the wrappers of 3 Musketeers singles and “sharing size” bars now bear one of 24 uplifting messages. The special bars will be available for at least the next six months, according to the Mars candy brand.

To promote the special bars, 3 Musketeers has released three 90-second videos. Two are story lines about a new girl at a high school — one filmed from her viewpoint and one, “First Impression,” filmed from the viewpoint of a guy who develops an instantaneous crush on her, from afar.

In both videos, we see the guy eventually work up the nerve to approach her by passing her a 3 Musketeers bar bearing the message “You are awesome.” She responds by adding her own touch to the message, so that it reads “You are awesome too :),” and sticking it to his locker door (above).

In another 90-second video, “The Art of Shine,” a teen helps inspire her older sister, who is struggling with creating an art piece, when she gifts her with a Mars bar bearing the message “Sisters always.”

All three videos are set to “This Little Light of Mine” — performed by Bea Miller, a 17-year-old “X Factor” contestant who exemplifies the positive attitude the brand aims to create with the campaign — and all are posted on Instagram and Snapchat, as well as YouTube.

“The pieces are moving and inspiring, reflecting the power of how, in the words of the tagline, “A Little Bit of Shine Goes a Long Way,” says 3 Musketeers brand director Allison Miazga-Bedrick.

After being posted for a week, the full-length version of “First Impression,” which is the only one of the videos currently being supported by paid media, had pulled 2.1 million impressions, with a 90% view-through rate, she tells Marketing Daily. “We’re very happy that the work is resonating with our consumers,” she says.

The positive message of encouraging teens to “create a sweet moment” for someone else contrasts with the “shade” that’s all too frequently thrown at teens on social media, points out Miazga-Bedrick, adding that “throw shine” could also be defined in a broader way, as a “movement.” The latter is reminiscent of the “pay it forward” movement – a phrase seen in some of the brand’s postings for #ThrowShine.

3 Musketeers has also partnered with a variety of influencers to “amplify ‘Throw Shine’ in their own voices,” says Miazga-Bedrick.  Zach Sang and Charlie Puth are among the teen influencers posting for #ThrowShine.

The Throw Shine campaign — along with an unusual “Musketeens” social initiative launched this past spring — are from Tribal Worldwide, and both fall under 3 Musketeers’ brand promise of “Feel Good Fun,” Miazga-Bedrick notes.

The Musketeens are three real teens (a girl and two boys) who were plucked from obscurity by the brand, with the express intention of turning them into brand influencers with appeal to Gen Z.

The teens’ videos are being promoted on YouTube and Facebook. While they’re helping to promote the #ThrowShine messaging (with a new video showing them “throwing shine” at folks in a park, for instance), their mission is broader: “They’re a great way for our brand to connect to our consumers and create a dialogue,” says Miazga-Bedrick.

“Throw Shine puts the role of 3 Musketeers as a brand more at the center, in a meaningful and emotional way,” she adds.