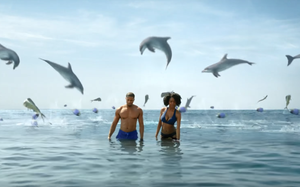 Water and electronics rarely mix. Unless you’re using one of JBL’s waterproof, wireless speakers, which, according to the brand, are more amazing than dancing dolphins and breaching whales.

A new campaign from JBL’s agency, Doner, shows off the new speakers’ capabilities, in use to the delight of dolphins and the consternation of cops. In one ad, a man and a woman stand waist-deep in the ocean repeatedly dunking the speaker in the water to show how it works. Each time the speaker is submerged, dolphins and fish jump in the air behind them in time to the music. Oblivious to the action behind her, the woman declares the speaker, “the most amazing thing I’ve ever seen.”

A second spot begins with a group of well-dressed people frozen underwater with the speaker playing. On land, a couple is explaining to police that there’s no party happening in their supposedly empty backyard (with a pool). When the police leave, the partygoers come up for air and the festivities resume.

“From a strategic perspective, our consumer wants to get out and live their lives in the moment,” Kevin Weinman, executive vice president of brand leadership at Doner, tells Marketing Daily. “They’re looking to be active and everywhere, and music is a big part of that.”

The spots will run online and on broadcast and social media in Europe and the U.S.

In addition to the 30-second ads, the agency created a series of online videos that show off the product capabilities in amusing ways, such as being repeatedly hit with water balloons, shaken on by a wet dog and playing while goldfish swim around them. The shorter vignettes are designed to run on social media to reach the Millennial target.

“Any way we can get this out there, and show how great these products are is super, super important,” Brad Emmett, executive vice president and executive creative director at Doner, says. “We have a system that will allow us to communicate with consumers in a variety of ways.”