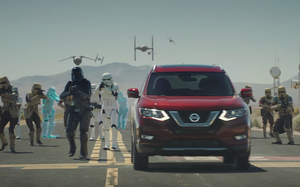 Nissan is launching a promotional campaign in support of the upcoming film "Rogue One: A Star Wars Story,” including two TV spots breaking Oct. 31.

The 2017 Nissan Rogue compact SUV is the centerpiece of the campaign that features Star Wars-themed TV ads, social and experiential content, and a sweepstakes. The automaker also is offering a numbered, limited-edition, full-sized-replica Death Trooper helmet that comes with purchase of the 2017 Nissan Rogue: Rogue One Star Wars Limited Edition vehicle.

The "Battle Tested" TV campaign, from TBWA/Chiat/Day, includes a 30-second national spot that begins airing on Halloween, as well as a full 60-second version of the spot in cinemas and a flight of sales and dealer-engagement ads and that will follow later this fall.

The 30-second spot takes place in a fictional Nissan test facility where engineers put vehicles through a series of routine safety tests and driving obstacles. This time, however, the Nissan Rogue and its driver are surrounded by Star Wars-themed simulations in the midst of an epic battle. A final test demonstrates the Rogue's forward emergency braking with pedestrian detection as the driver navigates through a rugged obstacle course, dodging stormtroopers, rebel fighters and otherworldly debris in the vehicle's path.

The spot highlights the suite of technologies available on the vehicle.

In addition to the regional TV advertising rolling out later this year, the campaign includes digital and social content to complement and amplify the "Battle Tested" messaging across all channels.

The Nissan's Ultimate Access Sweepstakes, which runs Oct. 31 through Nov. 27, gives fans a chance to attend the "Rogue One: A Star Wars Story" opening night at the El Capitan theater in Hollywood. Fans may register for a chance to win at NissanUSA.com/StarWarsRogueOne.

“How can a company go wrong riding the coattails of Star Wars, popular with all age groups including the hard to reach younger crowd,” Krebs asks Marketing Daily. “Nissan wisely has connected a specific vehicle - one of its bestsellers - to the campaign. Nissan seems to have covered a lot of bases from sweepstakes to social media.”

Autotrader and Kelley Blue Book advises its automotive clients to make sure campaigns have offline and online components for the greatest impact and success. “It appears that is what Nissan has done here,” she says.