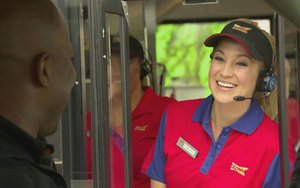 Although branded TV integrations have had a long history -- especially with unscripted TV shows -- bringing on new stuff to surprise viewers can be tough.

CMT with its second-year show, “I Love Kellie Pickler,” featuring former “American Idol” singer Kellie Pickler, figured out a way -- allowing a marketer to occupy the better part of an entire episode, all this because of Pickler’s early employment history.

Long before her success as a major contestant in Season Five of Fox’s “American Idol,” Pickler, growing up in North Carolina, had worked Sonic Drive-In, the iconic restaurant, as a rollerskating waitress. Introducing Pickler, the show did a segment on Pickler working there.

Pickler finished in sixth place in the singing competition program.

When taking on Pickler for the new CMT reality TV series, all that resonated in the minds of network executives. But it wasn’t until the new season that they decided to act on it.

Through a bet about first jobs with her husband Kyle Jacobs, Pickler decided to go back to Sonic for a brief work stint -- taking drive-through orders and rollerskating to cars to take orders and deliver food. The branded deal featuring Sonic, for the restaurant and its operation, ran for entire half-hour.

“Most of the time, integrations might be just for couple of seconds on-air or maybe one scene,” says Adam Steingart, SVP of integrated marketing for CMT. “But this is one of those opportunities where we could infuse her personality into a partner’s business, make an entire episode around it.”

Sonic had been a longtime advertiser on Viacom and CMT in particular. For this effort, the integration deal was tied to a traditional advertising upfront TV buy made through Sonic’s agency Publicis Groupe's Zenith Media. Looking at October 2015 to October 2016, Sonic spent $201.1 million in national TV, according to iSpot.tv.

“It was a collaborative process,” says Steingart, when it comes to Sonic’s contribution. “You are actually going in a town and shutting down someone’s business for several hours. You have to create a good experience for all involved.” CMT used a Sonic franchise in Nashville, where Pickler and her husband live.

Sarah Beddoe, vice president of national marketing for Sonic, said the integration worked well especially in highlighting “Sonic’s unique format, innovative menu and one-of-a-kind service.” She added: “Sonic has done integrations with various networks in the past, and the ‘I Love Kellie Pickler’ integration is on par with those executions.”

Through nine weeks of the second season, “I Love Kellie Pickler" has averaged a Nielsen 1.6 million viewers per week. The special Sonic episode airs October 27 at 10 p.m.

Rare are the branded integrations that are seemingly are “organic.” CMT executives believe the Sonic deal meets that criteria.

“None of us like the idea of something in a show for the sake of putting it in a show. You have a red herring on the screen, where people go, “Oh, what is that, a commercial integration?” says Steingart. “It’s getting tougher and tougher.”

The integration worked so well Sonic executives brought Pickler to their national convention to meet with their local franchises executives. Says Steingart: “It great to create a strong piece of content, and for the client to take great pride and ownership as well.”