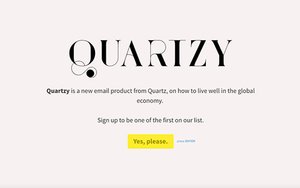 The newsletter curates a collection of editorial finds “about living well in the global economy,” according to the publishing company, and has already natively grown an audience of over 14,000 subscribers after first launching on Friday.

Quartzy has a great email model to emulate in the Quartz Daily Brief, the daily news digest email newsletter that has accrued over a quarter of a million subscribers since first being published four years ago.

Quartz says that its Daily Brief newsletter has become a community of its most loyal subscribers, and that nearly half are in a senior management position or above – fitting for a primarily business and tech news-driven publication. The newsletter delivers interesting news from around the world to subscriber’ inboxes every morning, offering the publication a new opportunity and channel to engage with its readers.

The Quartz Daily Brief has become such an integral engagement driver for Quartz that the publication is now offering a Spanish version of the same newsletter entitled La Agenda.