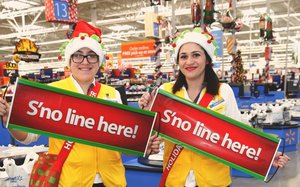 Walmart is hoping an army of elves can help it improve customer experience this holiday season, introducing a new Holiday Helpers program. Dressed in yellow vests with red sashes, the world’s biggest retailers will deploy the special associates in register areas to speed checkout, but also to provide last-minute assists for harried shoppers.

And along with its usual holiday rollbacks, the Bentonville, Arkansas-based retailer also says it is “dramatically” upping the number of items available through its Pickup service, to further streamline shopping. It has also increased its online assortment to 20 million items, up from 8 million at the beginning of the year.

It plans to introduce the Helpers Nov. 4, when they will pass out candy canes, steer shoppers to shorter lines, and even dash back into stores if shoppers forgot milk or bread. And it’s also beefing up Pickup staff, including a Pickup manager in every store, to make it easier for people who order online to retrieve their same-day items. (It says it expects to get five times as many Pickup orders than usual during some of the busier holiday weeks.)

Winning more shoppers won’t be easy. Newly released research from the National Retail Federation says that this year, department stores will be shoppers’ first choice, followed by online destinations, also at 57%. But 56% say they intend to do some shopping at discount stores like Walmart.

Walmart, which has been stepping up its investment in China in recent days, including a $50 million investment in New Dada and expanded offerings through its alliance with JD.com, has shifted its focus a bit, promising investors less growth through expansion and more through digital.

In a meeting with investors earlier this month, Walmart said it intends to slow new store openings and “rely more on comp sales and e-commerce growth to drive the top line, while increasing investments in e-commerce, technology, store remodels and other customer initiatives.”

That digital emphasis is likely to pay off this holiday season: The NRF says 93% of online shoppers are looking for free shipping, 47% for buy online, pick up in store or ship-to-store options, while 17% want expedited shipping and 10% same-day delivery.