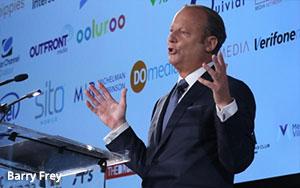 DPAA President Barry Frey took on the TV industry in his opening remarks at the association’s “Video Everywhere” conference Thursday in New York.

Speaking to attendees at the Roosevelt Hotel, Frey described home-based video media as “yesterday’s business” with its viewership in “a tailspin.”

He made a pitch for digital, placed-based ad media as the better medium for capturing the attention of mobile, urban-dwelling consumers.

“If you are spending a lot of time, energy and focus marketing and messaging to consumers inside the home, I say you’re doing yesterday’s business,” Frey said. His organization — the Digital Place-Based Ad Association — provides promotional and research support to the sector of the ad industry involved in out-of-home video-based advertising.

“Let’s look inside the home for the moment,” he said. “We all know about television fragmenting and declining. Here are some of the facts: Nielsen is showing prime-time declines in the fall season that just started. The top four nets are down almost 10% in their adult demos. And when you take a look at the under-24s, since 2010, broadcast and cable viewership has plunged more than 40%,” he said.

“And desktop viewership is down 12% percent in the last three years,” he added. “It’s in a rapid tailspin along with everything else in the home. And for people who are still on the desktop, there are major advertiser issues with ad blocking, with fraud, with viewability.”

Not surprisingly, he painted a much rosier picture when it came to discussing the positive attributes of DOOH (digital outside of home) ad media.

“Let’s take a look outside the home,” he said. “People are out and about more than ever. We are an increasingly urban society. We are actively living and working in cities. We are walking about, and we’re not languishing in suburban homes around the television set anymore.”

In an on-stage interview conducted by Frey, Greenfield said he doesn’t expect AT&T’s proposed takeover of Time Warner to be concluded any time soon. In fact, he thinks it will take a year or more.

“I feel very comfortable sitting here saying [that] at the next DPAA [a year from now], this will probably still be being debated by regulators. It’s probably a very good bet,” Greenfield said.