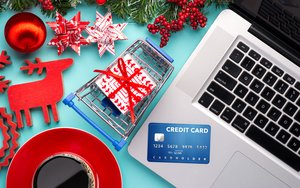 While brick-and-mortar retailers have long been accustomed to e-commerce muscling in on their holiday sales, a new forecast from Deloitte predicts this year could be a first, with online gift spending equaling that of physical stores.

Deloitte, in its 31st annual holiday research on how consumers intend to spend throughout the season, says that 50% of its respondents plan to shop online, and 47% predict their online gift spending will equal what they shell out at physical stores. That makes the Internet the most preferred place to shop for presents, followed by discount stores, at 43%.

And while 75% say their family’s finances are in as good or better shape than it was last year, they expect to hold their budgets steady: They plan to spend an average of $426 this year, on about 14 gifts. (Other expenses, including holiday travel, dining out, entertaining, decoration and non-gift clothing are expected to hit $572, for a total of $998.)

“At least for holiday gifts, the online channel is now equal to the store,” says Collin Brinkman, a director in Deloitte’s retail practice. “We knew this was coming, but to actually cross that threshold is pretty significant.”

The survey results will doubtless draw skepticism. While online sales are growing faster than traditional sales, and store websites represent an increasingly large slice of retailers’ total sales, e-commerce still represents only a small fraction—about 8.1%—of total retail spending, according to the most recent report from the Census Bureau of the Department of Commerce. That’s a long way from 50%, he acknowledges. “And our study measures intent,” he tells Marketing Daily, “but doesn’t track actual spending.”

In more bad news for physical stores, the survey finds that more consumers are planning to avoid stores and malls. The number of respondents planning to visit big-box stores fell from 63% last year to 59%, traditional shopping malls from 53% to 50%, and independent stores from 42% to 38%.

Brinkman says the research, conducted online with some 5,000 respondents, also confirms consumers’ fluidity in switching channels, whether they’re researching purchases online before shopping (66%), looking at items in stores first, then researching online (50%), or buying online and picking up in stores (43%).

And mobile phones continue to be a bridge between physical and virtual shopping, with 56% browsing items via phone, and 43% using them for purchases. (That’s up from 35% last year.)

He chalks much of consumers’ digital expectations up to Amazon Prime, “which has influenced the expectations of some 60 million online shoppers. People once expected next-day shipping to be free, now they’re more likely to be fine with two-day shipping. Consumer preferences are being reshaped,” he says.

“The store experience is still really important,” he says. But issues like merchandising and timing promotional sales becomes trickier with such stiffened competition from e-tailers. “That’s all the blocking and tackling of retail. Stores just need to meet people where they are.”

And that means finding new ways to connect, besides marking products down earlier and earlier in the holiday cycle. “Stores have done a great job of training consumers to wait until items are put on sale,” he says. “Retailers have to figure out the lead categories and hot products that will pull the consumer in, without putting everything on a deal.”