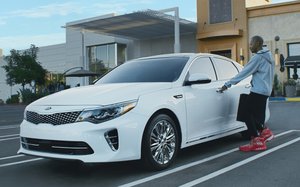 Kia Motors America is launching a campaign linked to its 10th year as the official automotive partner of the NBA.

The ad shows a customer in a sneaker store requesting a size 19 shoe. When the sales associate questions him on the size (“Are you sure you’re not a size 9?”), he laughingly shrugs it off before proudly wearing his brand new, yet very oversized, high-tops home.

While exiting the mall on his way to his 2017 Kia Optima, the man is so convinced he’s an NBA player that in an effort to spare bumping his head, he ducks under the door’s threshold, just like a 7-foot-tall starting forward would.

“Shoe Store” will air on TNT, ABC, ESPN and NBA TV and will be supported by digital and social media elements. A second spot will launch early next year.

Kia’s current marketing efforts are focused on raising awareness and challenging what people think they know about the Kia brand, and sports marketing is a major component of the strategy, says Kimberley Gardiner, director, marketing communications at Kia.

“The NBA is more popular than ever, and its diverse and tech-savvy fanbase is exactly the type of customers we are inviting to ‘Discover the New Kia’ and our lineup of world-class products,” Gardiner tells Marketing Daily.

The automaker has added elements and activations over the last 10 years of the sponsorship, with an emphasis on defying conventional thinking, she says.

“In addition to the league partnership, Kia also has a relationship with 12 teams, and we are the title sponsor of the league’s performance awards, including the Kia Most Valuable Player Award,” Gardiner says. “Last year we became the first non-apparel partner to have its logo appear on one of the major U.S. professional leagues’ all-star uniforms with a special patch on the upper left chest.”