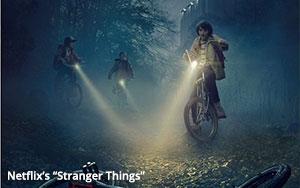 It's all part of a campaign to get in the Halloween spirit and promote a sticker pack now available for download on both Android and iOS that features artwork inspired by the show.

Those in New York on Friday who want to participate in the scavenger hunt need to ask Google Assistant "Where is Barb?" according to Engadget. The question reveals the first location of the hunt, which will take players through the city.

The scavenger hunt also capitalizes on Google's push to support local mobile search and advertising, which became the primary driver in helping the company hit $22.5 billion in revenue during the third quarter of 2016, according to Alphabet CFO Ruth Porat during Google parent company's recent earnings call with analysts and investors.

"The shift to mobile in Q3 remained the largest driver of the increase in Sites [traffic acquisition costs] as a percentage of revenue," she said.

Perhaps the messaging app can inspire players to search for a last-minute costume. Consumers will each spend about $82.93 this year on Halloween, up from $74.34 last year, according to the National Findings from the Retail Federation survey conducted by Prosper Insights & Analytics.