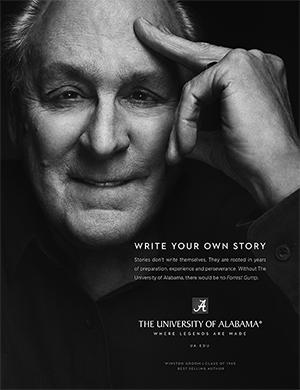 University of Alabama's (UA) football team is currently the top team in the country and the University is using this visibility to launch its first national advertising campaign.

Developed with RSQ, the "Where Legends Are Made" brings back established alumni both in front and behind the camera.

UA graduates Miller Mobley served as the TV director and RSQ's Rich Sullivan served as the creative director for the campaign. The cast also includes students from the University’s Capstone Men and Women. "Forrest Gump" author Winston Groom is featured in some of the ads and actor Gary Sinise, who famously portrayed Lieutenant Dan in the movie adaptation of Groom's novel, is the voice of this campaign.

The new messaging brings to life the University’s vision that all UA graduates learn greatness through work, grit and perseverance and that their graduates are just as successful academically as their athletes.

The 30-second TV spot kicked off during the Crimson Tide's season opener on September 3 followed by digital, print, and outdoor executions appearing in Alabama over the coming months. In addition to traditional advertising platforms, the national campaign will include merchandise and social media efforts.

UA's first long-term comprehensive campaign has been spearheaded by Linda Bonnin, the university’s new - and first - VP of strategic communications. As the university grows, the school wanted to tout its academic and athletic success together on a national stage, they say.

“The opportunity to work on this project was a real full-circle moment for me as a UA grad,” stated Sullivan, CEO and executive creative director, RSQ. “The level of talent tied to the project and the messaging of the campaign is something students, alumni and the entire Alabama family will be really proud of. It’s a reflection of the growth that’s happened at the University over the last decade and its level of excellence as the fastest growing flagship in the nation."