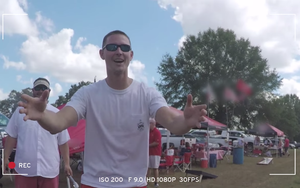 A new candid video and GIFs say it all about how people react to seeing a box of the donuts coming their way.

Agency Baldwin& (Raleigh, N.C.) hid two cameras inside Krispy Kreme boxes and captured the reactions over the course of a week, as the boxes were wheeled down the street on a hand truck, carried onto elevators and a train, and taken into a yoga class, a kids’ ballet studio, a football tailgate party and corporate offices.

The video, which has 30- and 60-second (below) versions, captures reactions ranging from widened eyes to open-arm embraces and triumphant cries of “Yes!”

The video, dubbed “The Effect Is Real,” plus eight GIFs meant to be shared with #KrispyKremeEffect, are featured on a dedicated area of the brand’s site.

The target audiences are adults 18 to 44, past QSR purchasers, and location-based mobile and desktop within 10 miles of a Krispy Kreme store.

The campaign includes no offer or direct-response promotions. And because the content is meant to be fun, the digital buy is almost exclusively opt-in (skippable) pre-roll.