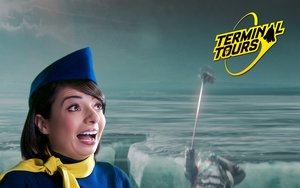 Activision’s Call of Duty’s latest iteration is going to take gamers off planet. In advance, the game (along with agency AKQA) is giving them a quick tour of the new, exotic locales.

The company is using Facebook Messenger to provide a guided tour through space, visiting the new planetary environments and tips and depicting the various unique ways one can perish in space. Using a bot, the experience employs a perky tour guide (played by actress Kate Micucci) who offers various choices through the messenger app, most of which lead to disastrous results.

For instance, one sequence asks the user if he or she wants to take a selfie on Jupiter’s moon Europa. A yes answer leads to a sequence where a character falls backwards off a cliff. The user is then greeted with a GIF of the tour guide cringing and stifling a laugh.

“As we approached the title’s launch, we wanted to continue to take the game beyond the game, but take the storytelling to a new level,” an agency representative tells Marketing Daily. “Since space is an entirely new environment for Call of Duty fans, we wanted to give them a taste of what those new planetary environments are like, and just how dangerous they can be.”

The Facebook Messenger bot is an expansion of an experience Activision debuted when the company announced the game earlier this year. The new, Titan Tours experience marks the launch of an official “Call of Duty” Messenger channel, which will continue to offer narrative adventures such as this, as well as game information and player support. It will also include Easter Eggs for the game (such as being able to ask the tour guide about current events — such as the recent Walking Dead premiere). “As culturally relevant things pop up, we’ll continue to populate with relevant responses that stay true to her character,” the representative says.

“Call of Duty fans had so much fun with our first Messenger experience at the reveal of Infinite Warfare, exchanging 6 million messages in 24 hours, that we wanted to give them a new way to explore the game before launch,” said Monte Lutz, SVP of consumer engagement, digital marketing and PR for Activision.

“Messenger’s currently the only major social platform where fans can have entire one-to-one conversations with brands at a mass scale,” the representative says. “And given Call of Duty’s massive Facebook following (over 24M fans), we’re capable of giving a large number of people an innovative and compelling experience that showcases the epic new in-game locations (and all the ways space can hurt you), all at once.”