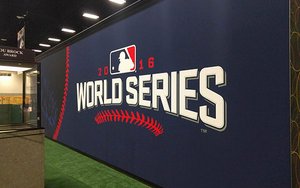 Through five games of the Major League Baseball World Series, the Fox event continues to score strong ratings gains --- largely because of the long-time fan interest in the Chicago Cubs and the Cleveland Indians.

Game Five grabbed the biggest results so far with a Nielsen 21.5 million viewers -- up 25% from 17.2 million viewers for Game Five a year ago, when the Kansas City Royals beat the New York Mets to claim the World Series crown four games to one.

The Cleveland Indians lead the Chicago Cubs three games to two. Analysts believe the two clubs will continue to attract major interest because of their respective droughts in last winning the World Series -- the Indians in 1948; the Cubs in 1908.

So far this year, the five-game series has brought in $183.7 million in national TV revenues on Fox, according to iSpot.tv.

Overall, automakers are the big spenders with $24.3 million. Wireless phone providers are next at $16.8 million, followed by automobile/general insurance companies at $15.6 million. Some 132 brands have been running 233 spots, airing 508 times.