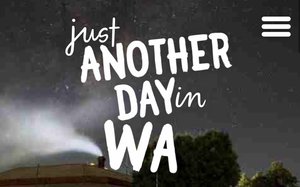 Tourism Western Australia is calling on visitors and local residents to contribute to a campaign in what it is calling a “fundamental shift” in how it promotes the area as a vacation destination.

The marketing effort, themed “Just Another Day in Western Australia,” attempts to bring to life the unique, personal experiences visitors can expect on any given day in Perth and throughout Western Australia.

In addition to developing many of the creative assets, others can share their extraordinary moments using the hashtag #justanotherdayinWA.

“Western Australia has so many extraordinary experiences that cannot be found elsewhere in Australia, or in some cases the world, but those of us who are lucky enough to live in the State tend to be blasé about its uniqueness and beauty,”.

“The premise behind the campaign is to highlight all these experiences that West Australians take for granted but visitors find memorable and extraordinary,” says Gwyn Dolphin, the tourism group’s acting CEO.

Also highlighted the campaign are the changes that have happened in and around Perth over the past few years including the opening up the Swan River through the development of the new Elizabeth Quay waterfront and redevelopment of Fremantle, the fishing village 30 minutes south of Perth.

The campaign also plays up that there will be 2,300 new hotel rooms to open by 2018 in the Perth area, including Crown Towers (December 2016) and Ritz-Carlton (2018), with another 1,000 new rooms set to open around the greater Perth region. There has also been a $1 billion redevelopment of Perth Airport and construction of a 60,000-seat international sporting and events stadium.

Other highlights include upgrades at Scarborough Beach with $78 million for a beachside swimming pool, cafes, restaurants, kiosks and public art and upgrades to Perth’s island getaway, Rottnest Island, including a luxury refurbishment of Hotel Rottnest as well as an upmarket “glamping” experience, which will open in 2017 and require a short ferry or helicopter ride.