Vehicle Sales Dip In October; Election Could Be Partly To Blame 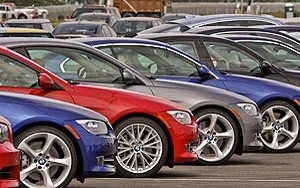 The election is taking a toll on vehicle shopping behavior this year, particularly in battleground states, according to Dealer.com, a Cox Automotive brand operating websites for almost two-thirds of U.S. franchise car dealerships.

“Shopping on Dealer.com websites was down 1% from September to October, indicating a continued softening of the retail market,” says James Grace, director of analytics product management for Dealer.com.  “At the same time, automotive digital advertising costs were flat month-to-month, suggesting ad costs are not easing with demand.  Steady marketing costs combined with pressure on sales could be a challenge for some dealers as they close out the year.”

Overall October vehicle sales fell an estimated 4.4%, according to Autodata Corp. The drop was blamed on two fewer selling days last month compared to a year ago. The results include an estimated decline of 2.3% for Ford Motor Co., which did not report sales on Tuesday due to a fire the previous day at its world headquarters in Dearborn.

“Regardless of whether or not 2016 vehicle sales surpass last year, 2016 will turn out to be another very strong year for the industry, particularly from the perspective of the depths of the recession in 2009-11,” says Tom Libby, manager, loyalty solutions and industry analysis, IHS Markit. “It’s easy to lose sight of how far we have come from six years ago.”

“On the surface, industry sales appear to be mediocre in October,” Lindland says. “In reality, we’re still teetering at the peak of record level sales, and doing so with major distractions of the Presidential election and historic weather [including an East Coast hurricane]. The American consumer continues to show resiliency, purchasing new products with enthusiasm. The challenge will be going forward, with longer loan terms and higher lease rates potentially undermining residual values.”

Fiat Chrysler Automobiles was down 10.3%. General Motors sales fell 1.7% in October, compared to a year earlier, but retail sales rose 3% as the company continues to reduce its reliance on less-profitable fleet customers.

Although Toyota Motor Sales were down 8.7% compared to October 2015, TMS still posted its best-ever light truck sales for the month. Nissan and Honda slid 2.2% and 4.2%, respectively. VW, still plagued by the scandal over its diesel engines emissions reporting, reported an 18.5% decline in sales for the month.

Though product is still strong, many consumers who waited to jump back into the market have done so by now, says Akshay Anand, analyst for Kelley Blue Book.

“The industry continues to stall as 2016 nears its end,” Anand says. “Lengthening loan terms and more reliable vehicles also will cause some consumers to stay out of the market longer, creating a minor conundrum for automakers down the road.  For now, though, disciplined OEMs continue to focus on retail sales while keeping incentives in check, and maintain healthy balance sheets as we forge on.”