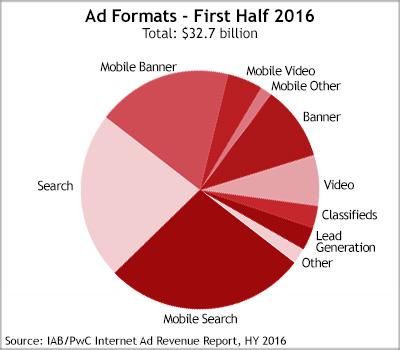 Desktop and mobile search ad revenue represented 50% of the total, up 19% year-over-year. Mobile and desktop search revenue contributed $16.3 billion in the first half of the year for 2016, up 19% from the first half of the year in 2015 at $13.7 billion, according to the Internet Advertising Revenue Report published by the Interactive Advertising Bureau (IAB) and conducted by PricewaterhouseCoopers.

Aside from search, mobile revenue consisted of mobile banner at $7.6 billion, and mobile other at $455 million during the first half of the year. Inclusive of mobile display related revenue, the display format totaled revenue of $13.9 billion.

Desktop display-related advertising accounted for $3.2 billion, or 19% of total revenue, down 8% from $3.5 billion.