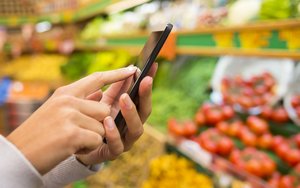 We know from numerous studies that consumers use their phones while shopping in stores.

For marketers, the obvious issue has always been about finding out exactly how shoppers are using their phones both before they travel to the store and then once they get there.

Most studies show that top of the list of what shoppers do is conduct product research and then check competitive pricing.

This matters, since so many consumers are using their phones to shop.

One recent study found that a large majority (83%) of consumers say their smart device is central to their shopping experience. That study, by Euclid Analytics, also found that 67% of consumers shop in stores because they like to see and touch products.

It turns out that most people who use their phones in stores are doing things that directly relate to the purchase decision, according to a new study.

The study is based on a survey of 2,500 shoppers conducted by InMarket, the beacon platform company.

The consumers surveyed were a combination of those using the InMarket apps platform as well as shoppers in dozens of supermarkets in Los Angeles, New York and Chicago who were approached by members of the research team who asked people using their phones what they were doing with them at the time.

More than half (55%) of shoppers using their phones in stores are using them for shopping related activities, according to the survey. This is how shoppers use mobile in stores:

One interesting tidbit is that only 8% of the consumers using their phones for shopping related activities were using the retailer’s app for the store they were in. This makes it even more challenging for retailers to interact with their in-store customers via mobile, especially during the moments the customer is actively shopping.

For those using their phones for activities related to purchasing, a lot of it is simply checking shopping lists. This makes sense in this survey, since the respondents were primarily in supermarket aisles. Here’s what they’re checking on their phones:

Another study that involved a team of secret shoppers making purchases in stores found that most (78%) of retail brands did not offer shoppable mobile apps. That study, Mobile Retail Report by NewStore, focused on 112 leading retail brands in stores in Boston and New York, including Gucci, Nautica, Polo, Dior, Vans, Swatch, Bally and Chanel.

That study found that 64% of brands use in-app push notifications for promotions and other content. If that content is pushed without the use of location technology, such as beacons, the messages could be totally out of context and wasted messaging.

Reaching a store associate via mobile was hardly at the top of the list of easy things.

The largest number (35%) of consumers was left to call the store. Not exactly the most effective use of a smartphone in the Mobile Shopping Life Cycle.