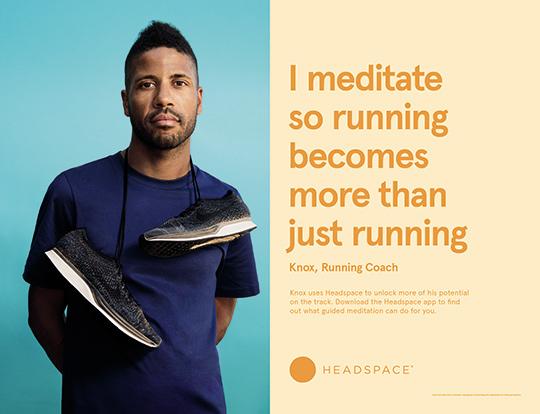 Headspace, the popular digital meditation app, is on a mindfulness mission, launching its first-ever ad campaign to win over new users.

The ads are aimed at a fitness audience, with real-life meditators explaining how meditation helps them do everything better, from salsa dancing and CrossFit to free diving and shooting hoops.

“The stereotype about meditation is that it’s static and passive,” says Melina Polly, Headspace’s VP of marketing and communications. “So concentrating on sport is a perfect counterpoint.” The campaign, running in the New York market, is also timed to the upcoming marathon, as well as the release of new sports-related content. She tells Marketing Daily that Andy Puddicombe, the former Buddhist monk who co-founded the company, is passionate about integrating meditation with an active lifestyle, developing the new content with sports psychologists. “It’s the opposite of what is currently associated with meditation,” she says.

“It’s the first to try and sell meditation to a mainstream audience and to portray the practice in a fresh way,” says Sasha Markova, creative director at Mother New York, which created the ads. The ads are running in sports programming on local tv, cinemas, pre-roll digital, and out-of-home, and were directed by Grammy-nominated Jason Koenig, best known for his Macklemore & Ryan Lewis' "Can't Hold Us" video. The campaign also hopes to build viewership through social media, leveraging influencers in different fitness communities, like running expert Knox Robinson and Paul Karmiryan of “So You Think You Can Dance.”

Launched in 2010, Headspace claims some 10 million users in 160 countries. The foundation app is free, with monthly subscription plans that start at $6.24. It declines to say how many users pay for Headspace. It also has books, podcasts and events, and Puddicombe continues to be one of mindfulness’ biggest evangelists, including a widely viewed Ted talk.

A recent survey from the National Institutes of Health estimates that about 8% of the U.S. population, or 18 million, currently use some form of meditation.

Polly says the campaign, with a spending level she describes as “a couple of million,” is starting in New York “as a bit of a test, and a place where we think we’ll find a prime audience. We hope to do this more broadly later.”