In Holiday Ads, Nordstrom Gives Thanks For Customers 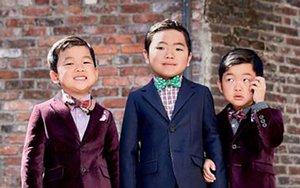 For the coming holiday season, Nordstrom is dialing down glitter and piling on gratitude, with an ad campaign devoted to thanking its customers for their personal style.

Kicking off with a peppy video of Nordstrom employees singing “Thank you for being a friend,” much of the campaign, themed “Love, Nordstrom,” focuses on more than 30 of its customers, selected by asking sales associates around the country for some of their favorite stories.

The retailer describes the effort as a series of “larger-than-life love notes,” photographed in Seattle, where it is headquartered, as well as in Nashville and Los Angeles. Customers were instructed to show up at the shoot with some of their signature style elements.

The campaign, from Partners & Spade, includes digital, print, and out of home, as well as shopping bags and coffee sleeves. And a tab on its website A “Love, Nordstrom” navigation tab on its website lets users click on the individual photos and read the thank-you notes, with messages like “Thank you, Jonah, for coming to see us the first morning we opened in Nashville. Trust us, we’re not morning people either.” “Thank you, Ivy,” reads another, “for making your mom’s 1977 Nordstrom shoe style even cooler the second time around. Happy Holidays.”

The store is also highlighting collections it thinks will be winners this gift-giving season, including a line of Mini Boden kids’ clothes inspired by the books of Roald Dahl, including Matilda and Charlie and the Chocolate Factory; a “Love, Pop-In@Nordstrom” collection, curated by Olivia Kim, VP/creative projects, which includes clothing, tech toys and accessories, and Wit & Wonder, offering “gifts with personality.”

While the campaign is running now, holiday decorations and pop-up shops won’t start until Friday, Nov. 25: Nordstrom continues to be the only major retailer committed to waiting until after Thanksgiving to pile on the holiday glitz.

It’s also re-upping its long-standing partnership with New Balance and Shoes That Fit, a nonprofit, offering $10 giving cards at all Nordstrom and Nordstrom Rack locations, hoping to give away 20,000 pairs of shoes to kids who need them. (It’s donated more than 90,000 so far.) And through January, it says it intends to direct its donations (2.5% of its net sales go to various nonprofits) to Big Brothers Big Sisters of America and Canada.