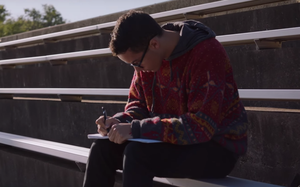 After this year’s contentious and bitter (some might say “nasty”) election season, the Paper and Packaging Board is looking to inject a little peace as we transition into the holiday season in the form of inspiring, handwritten letters.

Building off of its 18-month-old “How Life Unfolds” marketing campaign, the new effort has five inspiring “messengers” compose open letters about how they found peace after tragedy struck their lives. The “Letters of Peace” campaign encourages others to pause and read these letters during the holiday season and write their own thoughts using the hashtag #lettersofpeace.

“We wanted to hit on a quiet through the holidays that would be meaningful and get people’s attention," Joan Sahlgren, PPB’s director of public relations, tells Marketing Daily. “We were thinking about the concept of ‘peace on earth’ and wondering what does ‘peace’ mean in this world.”

The campaign messengers were all part of tragic events that shook themselves, their families, their communities and, sometimes, the world. Yet they were able to move on and work to make the world better. Among them are: Patrick Downes, who is a Boston bombing survivor and trauma health care advocate; Asia Graves, a human trafficking survivor and anti-trafficking advocate; Cliff Molak, who has been raising awareness of the effects of cyberbullying after his brother committed suicide last year; Heather England, a Columbine shooting survivor and advocate for peace, and author/activist/former bullying victim Jodee Blanco.

“We didn’t want people who [simply] overcame disaster,” says Sandy DerHovsepian, associate creative director and writer at PPB agency Cramer-Krasselt. “We wanted people who had been harmed by other people and still have faith in humanity.”

The stories, which can be found at www.howlifeunfolds.com/lettersofpeace, are moving. “With every handshake, wink, smile and compassionate heart, we reject terrorism’s attempt to morph us into hateful xenophobes,” writes Downes in his letter. “The smallest and largest signs of peace send a message that peaceful acts will always triumph over those that attempt to break us apart.”

In addition to spreading the message of peace, the effort is intended to reinforce the importance and impact of written communication, Sahlgren says. That importance is never more felt than during the holiday season, when people send paper cards and packages to friends and loved ones far away, she says.

The integrated campaign will include social media activations, as well as paid print and digital media advertising, and will run through the holidays.