The World Series: Brought To You By Television 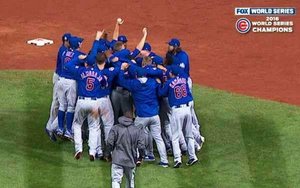 Every once in a while, it feels appropriate -- amid all the noise about streaming, time-shifting and watching TV “everywhere” (such as in the palm of your hand or in your lap, for example) -- to recognize those instances when there is no substitute for the real thing.

In this case, the real thing is television -- real television -- and the occasion is the World Series, which ended in epic fashion on Fox Wednesday night. Just about the only aspect of this momentous event that Fox Sports was not capable of bringing to you live was the spectacle of hell freezing over -- because that’s what must have surely happened as the Cubs won the World Series.

What a glorious night for the Cubbies, Chicago, Major League Baseball, Fox and television in general -- a riveting Game 7 that had millions glued to their TV screens long after midnight.

The telecast had it all -- tension, drama, action and even iffy weather. Talk about suspense: A rain delay at midnight (eastern time) just as Game 7 of the World Series was about to go into extra innings? Holy cow! as Phil Rizzuto used to say. Rain or no rain, turning in for the night was just not possible.

I have always said that if you want to witness the best that traditional, broadcast TV has to offer, then watch how these pros handle a high-profile sports event. Live, televised sports has long been the place where television has excelled the most.

And it’s not any “television” either. When it comes down to the most important events in sports, the responsibility always falls to one of the big TV networks. And thank heaven for that. They are the only ones with the resources of money, talent, equipment and experience necessary to pull these things off.

Fox did a great job -- an opinion and a result that should surprise no one because the fact is, traditional TV is so good at this kind of thing that we all take it for granted.

In the booth, Joe Buck and John Smoltz were superlative throughout this entire Series, and never more so than in Game 7. Fox’s production team didn’t miss a thing either. No close play went unexamined. Every time there was a game-changing play, no reaction -- from the managers to the owners to the players to the fans -- went unseen or unaired.

You might say a World Series as dramatic as this one offers up such a treasure trove of imagery that bringing it all home -- to your home -- should be a no-brainer. But it’s not a no-brainer. It’s a many-brainer. It is a tribute to the skill of everyone involved that it came off so seamlessly and looked like it was all so easy when you watched it on television.

Seamless? In this context, you might classify the word as a synonym for “viewable,” as in “viewability.” That’s the great divide between real TV and, well, all those other platforms, isn’t it? On real TV, viewability is not even something you think about. On all the others, it’s just the opposite -- you think about it constantly.

Real TV hasn’t had a viewability issue since rabbit ears went the way of the dodo. Viewers of Wednesday night’s Game 7 of the World Series should say a hallelujah for that, and give a big thank you to the legacy medium that deserves it. That medium would be television -- otherwise known as “not dead yet,” not by a long shot.

baseball, sports, tv
5 comments about "The World Series: Brought To You By Television ".
Check to receive email when comments are posted.
Read more comments >
Next story loading