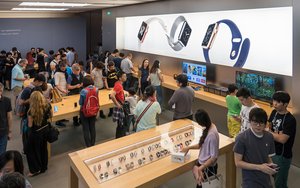 The market for wrist-based wearables has grown by almost a third since last year and Apple continues to lead based on the number of smartwatches being shipped.

The wrist-based wearables market grew 31% from last year with more than 17 million units being shipped in the last quarter, according to new tracking numbers.

More than 6 million smartwatches and more than 11 million basic fitness-tracking wearables were shipped globally this past quarter, according to new research from Canalys.

Apple leads the market with 2.8 million Apple Watches shipped, although this may be a temporary inflation due to the new smartwatches having just been launched, according to Daniel Matte, analyst at Canalys.

“While the new models are selling well, there are still unsold first-generation Apple Watches in the channel,” Matte said.

“Q4 performance will be key to better assessing the long-term prospects of the improved watch models. Apple needs to make a strong marketing push during the holiday shopping season, especially to highlight new and compelling apps for its platform.”

GPS device brands have also been entering the smartwatch race, with Garmin offering a line of GPS-enabled smartwatches and TomTom recently launching a variant that also includes untethered music playback through a set of Bluetooth earbuds.

Other brands have launched fully untethered wearables. For example, some of Samsung’s current smartwatches can connect to cellular networks on their own without a smartphone.

Here is the breakdown of market share for smartwatches shipped in the last quarter: