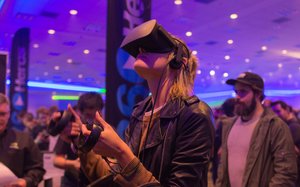 The projections for the growth virtual reality keep coming and the farther out they go, the higher they get.

The latest forecast has virtual reality growing to $38 billion in revenue in 10 years.

VR growth over the next two years will be modest before explosive growth after that, according to the semi-annual study by Greenlight Insights.

The study comprised a survey of 500 VR industry professionals identified as the key decision maker within their company. Three-quarters of them have primary operations in North America and more than a third (37%) are in general management.

For the next year, consumer-related spending on virtual reality will account for 95% of VR revenue and will lead other enterprise applications until 2021, according to Greenlight.

Most of the money will be in hardware, such as head-mounted gear and VR cameras, to the tune of $38 billion in 2026, for 62% of total revenue.

VR cameras also are poised for 10-times growth to 12% of revenue by 2026.Until 2020, consumer related experiences will generate $1.4 billion

Despite the rosy projections for large revenue growth over the long term, the expected profit over the short term doesn’t look so promising. When asked if they believed the revenue from their company’s virtual/augmented reality activities would be profitable, where’s the industry pros came out:

In terms of what they’re developing for VR, 47% of the industry professionals are working on games and 42% on cinematic content.

While this forecast sees revenue of $38 billion in 2020, another recent study by Citi’s Global Perspectives and Solutions Group sees AR and VR market size at $80 billion in four years and at $2.16 trillion by 2035.

And yet another study by IDC forecasts the AR and VR markets to reach more than $162 billion by 2020.

No matter the study or which part of the VR elephant is being measured, the general direction is the same. The only questions are when and how high.