Getting Clients To Embrace New Creative Ideas And Channels 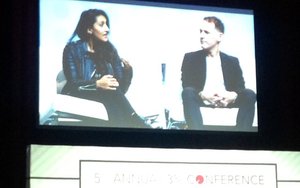 TBWA is evolving beyond the traditional brief proposal both externally and internally.  Barham's job as a strategist is to move away from "loads of decks and piles of paper" to instead produce Snapchat-able and visual content. "A different kind of work is not going to get there with the same kind of inputs," he says. "Especially at scale. There is a lot of muscle memory and bad habits."

The Omnicom-owned shop is reframing itself to behave more like a social network. "TBWA sees the network as an inspiration and source for inputs rather than a distribution system," he says.

TBWA's Backsplash platform serves as a proof of concept to encourage clients to step outside of their comfort zones. People throughout its offices contribute on a daily basis what is going on in its various cities and jobs. In Los Angeles, for instance, they produce daily films. Others post to Instagram about their daily activities.

Rather than simply preaching these new tactics, the agency is doing what it wants clients to do. For instance, TBWA and Nissan are developing some 3,000 pieces of content each year that aren't always obvious brand-building projects. Recently Nissan celebrated National Doughnut Day on the first Friday in June by doing doughnut-turns in a car over a pile of sprinkles that helped to decorate real doughnuts. The project attracted massive social media buzz.

Gatorade and TBWA teamed with tennis player Serena Williams to introduce a Snapchat mobile game timed to coincide with the U.S. Open. People played this ad game for two to three minutes, Barham says. Unfortunately the experience didn't go entirely according to plan since a level was unlocked only if Williams won the U.S. Open tournament, but she was upset by Karolina Pliskova in the semifinals.

Hardin says it can be challenging to develop non-traditional campaigns due to subjectivity. “What is considered successful?” she asks. "My role is to be a connector and help ambitious brands and agencies connect in this space. Diverse seats at the table need diverse voices." She advises brands be "open to the idea of next" but wonders whether Facebook likes or giveaways can satisfy an industry driven by results. "Can we as an industry be okay with experiences, really?"

Indeed, while non-traditional campaigns may attract attention, ROI still matters, adds Sidhu. Clients are looking to you for expertise and understanding. You can either "feed them bunch of lies or be brutally honest." While her agency is keen on virtual reality, she acknowledges that right now the medium’s reach is limited. Still, "when used wisely, VR has power to impact consumer behavior and feelings. There is a lot of jumping on VR for the sake of its cool. That ship has sailed. The challenge we have is to create work that creates value."