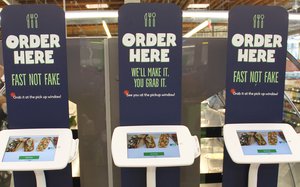 Intense grocery competition is eating into Whole Foods Markets territory, and it announced a series of changes amid another quarter of declining sales.

While total sales for its fiscal fourth quarter rose a bit to $3.5 billion — a record for the Austin, Texas-based grocery chain — they fell for the full year. And comparable-store sales fell 2.6% for the quarter and 2.5% for the year, its first annual decline in sales since 2009. Quarterly net income was $88 million, up from $56 million.

The company also announced some major management bombshells as well, with the news that co-CEO John Mackey will now run the company on his own, with Walter Robb, Mackey’s co-CEO since 2010, stepping back. (He will remain on the company’s board.) And Glenda Flanagan, its long-time CFO, is retiring.

The company acknowledged that part of its problem is that so many other retailers are making significant gains is selling healthier foods.

“Food retailing is evolving at an incredibly fast pace, and consumers have many more options for how and where they buy their food than ever before,” says co-CEO Robb, in its release. “At the same time, the market opportunity is expanding as the consciousness about fresh, healthy foods continues to awaken.” But it says it believes its brand is well positioned to take advantage of changing consumer tastes, despite recent bumps. “Our company mission and commitment to transparency are more relevant and timely than ever, and we will keep innovating and creating environments where people can connect and find a sense of community — in our stores and in the digital world.”

The company says its launch of the new 365 by Whole Foods Market has been successful, and that it’s making digital gains, with 13 million social media followers, its claim as the first grocer to use chatbots, and an expanded partnership with Instacart, which means it now offers more home delivery than any other food store.

Observers are not impressed. “This downbeat set of results caps a disappointing year for Whole Foods, across which the company has lost market share and seen both productivity and profitability decline,” writes Conlumino, the retail research company, in its analysis of the Whole Foods performance. “With other mainstream grocers muscling in on segments like organic it has become an increasingly weak differentiator and its ability to command a price premium is much less than it once was. In essence, the company needs more balance in its messaging and must find other ways of communicating its uniqueness.”

And Deutsche Bank, which rates the company a hold, isn’t expecting a quick fix. “Whole Foods still has a ways to go towards improving its relative price/value positioning,” writes analyst Shane Higgins, who covers the company, pointing out that traffic — a key indicator of how well people like the store - -fell 4.2% in the quarter. He expects comparable-store sales to continue to be pressured for the next two fiscal years. “Management expects traffic to improve as initiatives roll-out throughout the year. However, we believe that traffic could be choppy as competition remains intense.”

He thinks Mackey being fully back in charge could augur well for the turnaround:  “Returning to a single CEO could streamline decision-making, which is critical in this rapidly evolving competitive environment.”