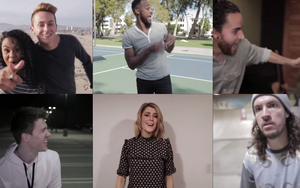 “One of the goals of Hello Lab is to redefine the way we work within the influence marketplace,” Simeon Spearman, lead manager, emerging marketing at AT&T Mobility, tells Marketing Daily. “This generation is able to tell when there’s a one-off activation, rather than a relationship with these influencers.”

In Gaertner’s series, for instance, the self-taught dancer and choreographer will become her fans’ personal coach. Each week, Gaertner will post an easy-to-learn instructional video for her fans to practice and share using the hashtag #HelloLab. Submissions will be included in weekly fan roundups.

Similarly, Ocando will provide advice to fans in her new series, “Dear Maiah,” building skits around some of the situations presented. Saber, meanwhile, will use the format to teach fans how to make vegan dishes with ingredients picked by her followers.

“One of the fundamental tenets of these programs is we work with these creators and [help them] with what they want to do on their channels,” says Bryan Thoensen, senior vice president at Hello Lab partner Fullscreen Strategic Content Group, "and Instagram has become a formidable player in the video space."

Instagram has become an enticing platform for Hello Lab and AT&T, Spearman says. “It’s given us a steady drumbeat throughout the year and given us contact with different audiences through the space,” he says. “We’re exploring how we adapt it for 2017. We have an interest in how we will work with these new voices for entertainment and what’s next.”