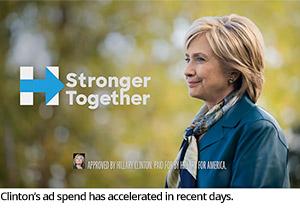 Now, in the late stage of the campaign, presidential candidates are doing some traditional marketing -- increasing spending with a greater share going toward local TV versus national TV.

Trump, who did not spend much TV money earlier in the year, ramped up spending in a big way in October -- averaging $2.5 million in daily ad spend by October 12.  During the month, Clinton’s ad spending reached $1.4 million per day.

But Clinton’s local TV spending soared October 29-30 through November 2 -- at one point, to over $7.5 million. Trump’s local spending was $3.5 million.

National TV also began to climbing rapidly by comparison to lower national TV spending earlier. For the first two days of November, Clinton was just over $2 million, while Trump’s total came to $1.25 million.

Clinton has been relatively more consistent in her spending during the month than Trump. Her biggest daily ad spends have been in Philadelphia ($320,000); Cleveland ($200,000)  and Miami-Fort Lauderdale ($235,000). 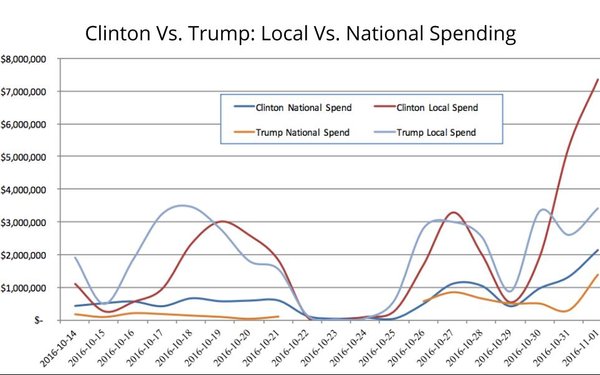