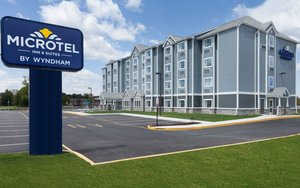 Wyndham Hotel Group is naming Terri & Sandy as the agency of record for its Microtel Inn & Suites. There was no previous AOR. Terri & Sandy met the client Meghan Swatt of Wyndham when the agency spoke at an ANA conference. The hotel chain was impressed with the agency and decided to hire them.

“Their strategic insights and passion for their brands was contagious, and we wanted to put that to work for Microtel," says Swatt.

The agency will create a fully integrated campaign for the chain of 292 economy hotels, with the first creative under this new collaboration debuting next year.

In 2012, parent company Wyndham launched a rebranding strategy for the budget hotel brand revolved around a "design-focused" look.  All of the creative, ranging from property collateral to online advertising and television spots, promoted a single, key differentiator for the brand: that every Microtel hotel was designed and built from day one to be a Microtel hotel and nothing else.