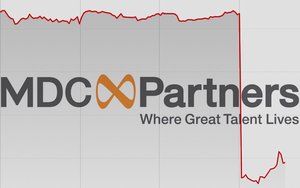 MDC Partners stock hit a new low of $3.00 in Friday trading after the firm disclosed third-quarter results late Thursday and announced that it has hired LionTree Advisors to assist in evaluating its financial and capital structure strategy. The stock hovered around the $3 mark after falling 61% from its previous close. By midday it had climbed a bit to $3.22

The poor results and hiring of LionTree led analysts covering MDC Partners to downgrade their ratings on the company. Wells Fargo lowered its rating from outperform to market perform. Wedbush lowered its outperform rating expressed on September 6 to Neutral, lowering its price target from $20 to $8.

In a note titled “Far Too Late, Downgrade to Market Perform,” BMO Capital Markets analyst Dan Salmon stated: “We were wrong to believe MDCA could thread a tight needle in 3Q; while organic growth and working capital improved, management has suspended the dividend, undertaken a restructuring, and hired an advisor to examine ‘financial and capital structure strategy.’”

Added Salmon: “We believe many investors were prepared for a dividend cut, but we expect outright suspension to drive significant shareholder turnover. However, it is the hiring of an advisor (and the justified questions about potential equity dilution, etc.) that leads us to Market Perform as any potential fundamental recovery is overshadowed near term.”

Last week, one of the firm’s biggest supporters on Wall Street -- Albert Fried & Co's Richard Tullo -- downgraded the stock from overweight, based on what he says are concerns over MDC's ability to withstand an advertising recession.