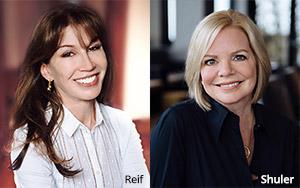 August Jackson is naming Laura Shuler as CEO of the brand communications agency. Shuler will oversee a staff of 53 full-time employees and some 1,000 freelance associates with offices in New York City, DC, and Chicago. She succeeds Frank Andrews, who founded August Jackson in 2003 and who will transition to the role of Chairman.

Shuler brings nearly three decades of brand marketing experience to her new role. Most recently, she served as the executive director for brand engagement at WPP’s Landor. Earlier she was U.S. president at Jack Morton Worldwide.

Shuler's former Jack Morton colleague Robin Reif is also joining the agency as EVP, client engagement to lead the account department and direct new business strategy and execution across the agency. In this newly created role, she will report to Shuler. The two worked together at Jack Morton for 20 years, though Reif never reported directly to Shuler during their overlapping tenure.

Most recently, Reif led the consultancy she founded in 2012, providing organizations with strategy and creative execution of employee engagement campaigns, thought leader conferences, event marketing programs and culture change initiatives. Prior to this role, Reif was SVP, group account director at Jack Morton for 24 years.

Both Shuler and Reif will be based in New York City.

“I see tremendous growth opportunities for August Jackson in helping companies and brands engage their most important communities,” says Shuler. “We have a powerful combination of strategic, creative and executional capabilities that are critical for designing campaigns and events that drive brand advocacy.”