Lifting The Lid On Old Bro-Dom: Tales Of The 3% Conference 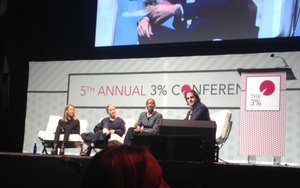 Let’s face it: The year hasn’t been great for men or women, in politics or advertising.  Throughout this election period, we’ve seen the return of time-worn gender stereotypes and divides as we attempt to lift the lid on old bro-dom, which is a stubborn institution. It awakens fury on both sides.

Changing behaviors is painful, but it seems that lately, the fact that a concept like “unconscious bias” has been trickling into the discourse is progress.

Yet it appears some Republican voters are pulling for Trump more out of sheer Hillary-hate than real Donald-love. And sadly, Saatchi’s now-retired chief Kevin Roberts’ statement that “women don’t have vertical ambition” is still ringing in my ears, along with recent harassment suit scandals and the leave-taking of several very senior women in the ad and media industries.

So at the fifth annual 3% Conference, held in New York City this week, it was inspiring to hear Susan Credle, global chief creative officer at FCB,  tell the packed crowd at the Manhattan Center: “It’s a great time for women, and the world wants you.”

The audience exhaled, and sat up straighter in their stiff seats for a minute. Credle’s positivity had lightened the mood enough so that that she was able to joke: “Even your chairs can be biased.” And that unearthed another funny detail about little issues that we take for granted. In this case, the chairs on stage that Credle and Jeff Goodby, her partner in the “Legends” presentation, were occupying. (Full disclosure: I have worked for Jeff at Goodby, Silverstein & Partners.)

The stage was black, and minimally furnished with a large screen and two replica Barcelona chairs in white leather.  They gave off an art-directed, sophisticated vibe, and maybe the choice of white was supposed to be feminizing.

Still, the classic design is low-slung and backward-vaulting, which makes it very difficult for any leg-crossing, skirt-wearing women to sit comfortably while talking on an elevated stage.

Or as Credle put it to Goodby: “I bet you haven’t thought about your underwear once.”

The discussion touched on many such awkward, rarely mentioned realities in agency life, with both Credle and Goodby reassessing their own pasts and digging deeply for the truth.

“What incentivizes women and men can be very different,” Credle said. “Men get more excited than I do about awards,” and she went on to explain she just wasn’t that jazzed to jump on stage with a team of men and collect “hardware,” or keep wondering, “How many did I get?”

Goodby gave it some thought, and agreed that there is a difference — there is some inherent maleness in the whole system of awards. He joked: "Having served on many juries, I can say that you shouldn't be as thrilled to win them — or as disappointed not to."

Then Credle said what excited her was not more money or a higher title, but putting work into the world that she was proud of and made a difference. And “setting an example for other women.”

She said that for young employees, just “being recognized” by one of the higher-ups is confidence-building. She said Phil Dusenberry did this for her at BBDO, where she started as a substitute receptionist.

This gave Goodby an opportunity to talk about his mentor, Hal Riney, a real Hemingway-esque “man’s man,” who unapologetically ran a boys’ club and was the opposite of nurturing, as one anecdote made clear.

“He had forgotten he hired me,” Goodby said. “When I ran into him, I said, ‘How’s it going?’ And he answered, ‘What’s it?’” Goodby responded, “It’s just a thing people say.” And Riney retorted, “What people?”

On the male side, Goodby admitted he saw advertising as a kind of “vandalism,” like smashing pumpkins.

The duo also covered an otherwise untouchable subject for women: Female staffers behaving as warrior ants. That means if one woman succeeds, she pulls up the ladder behind her.

Credle was refreshingly candid in admitting that just such a mini-Susan came along at one point in her career at BBDO, and she was threatened. “You go back to survival instinct,” she said. “I thought, “I’m gonna take her out!”

Then she admitted that she did “take her out” — to lunch and dinner. And learned that “there’s tons of room for everybody.”

“Conferences get rid of warring ant behaviors,” she said. “We see each other and acknowledge each other. “

Credle also broke another taboo by admitting she was a “crier.” She said that at one point she told her male partner, “You have to know something about me. I cry. You get very forceful when you’re impassioned. I cry.”

Credle added, “Crying isn’t acceptable in the workplace, but it’s no different than having a loud voice.”  (She even mentioned women getting surgery on their tear ducts.)

In the end, she added: “Being a woman gave me the energy to succeed. I don’t think I would have been as successful as a man.”

Amen. I can’t wait until we are no longer fighting about politics or gender, and can move on to other things, like the Starbucks holiday cup. It’s green, and includes a single line drawing teeming with people. I love it. Silver bells can go shove it.

advertising, management, politics, women
8 comments about "Lifting The Lid On Old Bro-Dom: Tales Of The 3% Conference".
Check to receive email when comments are posted.
Read more comments >
Next story loading