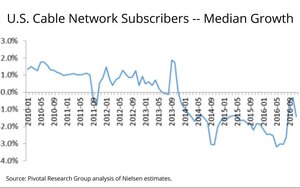 Nielsen has completed a review of its cable universe estimates for November and determined that the original estimates were, in fact, accurate and is re-releasing them today. On Oct. 30, Nielsen temporarily withdrew the estimates due to concerns about a “larger than usual change as compared to the prior month.”

Following a thorough review of its processes, Nielsen said it has verified that “November estimates were accurate as originally released and that all the processes that go into the creation of the estimates were done correctly.

“The month over month decline in coverage that most cable networks saw was driven primarily by an overall decline of approximately half a percentage point (.55) in the ‘cable plus’ universe, meaning fewer households are subscribing to cable through” a conventional cable, telco of direct broadcast satellite provider.

“The decline was not specific to a network or group of networks, meaning, not driven by household changes in tiers or packages,” Nielsen continued, adding that it currently is “researching new and emerging technologies and multichannel providers such as ‘virtual MVPDs’ and will incorporate these households into the Cable Network Coverage Area Universe Estimate definition at a future date and in cooperation and agreement with our clients.”

The development is another indication that American consumers are shifting their consumption to over-the-top video services such as Netflix and Amazon vs. traditional MVPDs.

Despite some grousing from Disney’s ESPN unit, Wall Street analyst Brian Wieser issued a note indicating the incident, as well as similar previous one, “serves to highlight that complaints from media owners or others who would benefit from adjustments to the data regarding Nielsen or any other audience measurement provider should generally be taken with a proverbial grain of salt.”

Wieser, a former Madison Avenue executive who is now an analyst with Pivotal Research Group, added, “In fact, they should often be ignored. By contrast, concerns made by the agencies and advertisers who have to justify budget allocations around the quality of a measurement service provider’s methodology should be viewed as having greater importance.”

He concluded the data indicates ESPN has experienced a 3.1% universe decline.

ESPN issued a statement, characterizing the universe update as an anomaly: "This most recent snapshot from Nielsen is a historic anomaly for the industry and inconsistent with much more moderated trends observed by other respected third party analysts. It also does not measure DMVPDs and other new distributors and we hope to work with Nielsen to capture this growing market in future reports.”