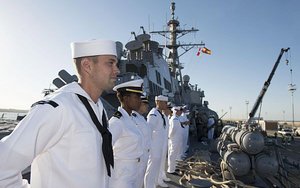 In what the agency is calling a first-of-a-kind event for the U.S. Navy, Young & Rubicam is coordinating a so-called “idea hack” this weekend to develop new approaches for messaging to potential Navy recruits.

The WPP agency won the Navy recruiting account last year and has since set up an office in Memphis from which the Navy business and other accounts will be managed.

The Navy idea hack is being staged at Northeastern University and is being sponsored via the agency’s Z Academy program designed to recruit and train up-and-coming Generation Z ad talent. Gen Z is also currently the core U.S. Navy recruitment target.

Participants--more than 50 students with backgrounds in coding, design, writing, and creative—will form teams and develop social media and other digital strategies that address such themes such as medicine, anti-terrorism, innovation, scholarship, teamwork and history. They’ll have the opportunity to discuss ideas with Naval officers and other personnel as well as with executives from Y&R and WPP’s Navy Partnership team.

Those interactions are designed to help the students understand how young Americans currently talk about the military, public service, humanitarian aid, foreign policy and LGBT issues.

Projects will be critiqued by a panel of judges including Y&R Global CEO David Sable and Navy Executive Officer, Commander Kevin Shilling.