Finally, A Ticket That Can Unite The Country (If You're A Cubs Fan) 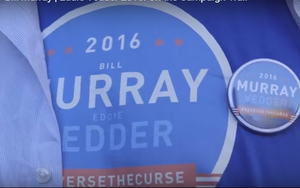 It’s pretty late in the game, so to speak, but if you’re still undecided about who to vote for in the presidential race, really late entrants to the contest, Bill Murray (Prez) and Eddie Vedder (Veep), may be an alternative ticket to consider.

Not really, but if you’re a Chicago-based agency full of former long-suffering Chicago Cubs fans (the Cubs, as you may have read, ended a 108-year-old World Series Championship drought last week) the giddy creative juices will be running over for some time to come.

Such agencies include Walton Isaacson, where a creative team came up with the “big idea” to draft actor/comedian Murray and musician Vedder to run as independent candidates for the highest office and second-highest office (technically anyway) in the land respectively. Both were prominently featured during Fox’s coverage of the World Series, one of the highest rated series in recent years.

Their qualifications? Well, they each showed leadership skills in separate games of the series during the seventh inning stretch when they led renditions of “Take Me Out To The Ball Game.” (Beyond that? Ask them).

It’s a real fake campaign complete with lawn signs, buttons, t-shirts, Facebook, video and more. In one clip, it’s made clear that the Murray/Vedder team supports the elderly “just like Grand Daddy Ross,” aka Chicago Cub catcher David Ross, who, at age 39, is, by Major League Baseball standards, a senior citizen.