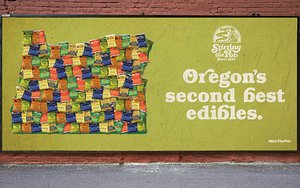 With voters in nine states considering today whether or not to allow recreational or medicinal use of marijuana Kettle Brand Potato Chips has launched a new “Stir The Pot” campaign that celebrates the brand’s counterculture heritage in its hometown of Portland, Ore., where it was launched in 1982.

The campaign, from ad shop Duncan Channon, is local to the Portland market and isn’t intended to sway votes—recreational use in Oregon was legalized in 2015. Rather it’s intended to have some fun with the market’s pot culture while reinforcing the brand’s progressive values.

Components include radio spots (which include the “Crunch Time” jingle), outdoor ads on bus shelters and wild postings and a so-called “edible wall” erected on one of the city’s main thoroughfares that is laden with bags of Kettle chips free for the grabbing by passersby. The wall is being restocked daily at 4:20 p.m. (wink, wink and here’s an explanation for those that don’t get the timing reference) through Nov. 14.

“Kettle Brand’s been doing things differently since their founder borrowed a van to sell natural food up and down the Oregon coast,” said Duncan Channon Executive Creative Director, Anne Elisco-Lemme. “So with our counterculture “Stirring the Pot” message, we’re not just celebrating how the chips are made, but people everywhere who choose to do things differently.”

Added Elisco-Lemme: “As far as the 4:20 pm daily refill of the edibles billboard, there’s no special significance to that. Just a random time between lunch and dinner. No story there.” (Wink wink).

Oregon is one of just a handful of states that have legalized recreational use of weed while more than two dozen states have legalized its use for medical purposes. Those states with measures up for consideration to legalize the drug this election cycle include Arizona, California, Maine, Massachusetts and Nevada (for recreational use) and  Arkansas, Florida, Montana and North Dakota (medicinal).